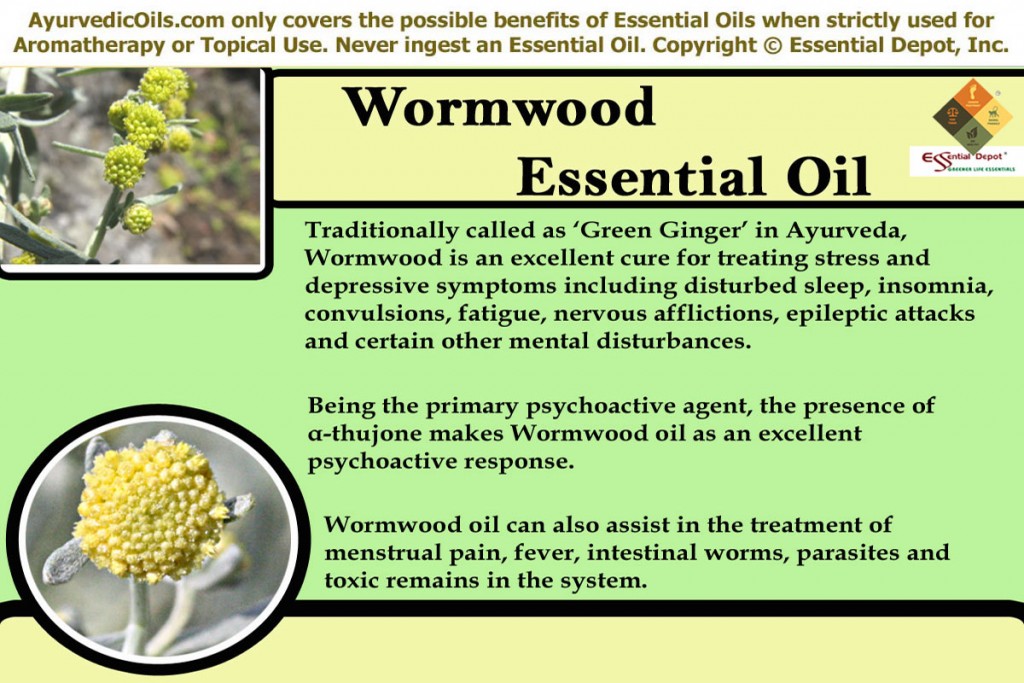 Wormwood is botanically known as Artemisia absinthium. It is widely known as an effective remedy for treating worms like tape worms, round worms, hook worms etc in the human body. With its narcotic effects, Wormwood was an important part of the popular alcoholic beverages like Absinthe, which is prohibited now.

Wormwood essential oil is extracted from the flowering tops, twigs and leaves through steam distillation process. Ginger is an incredible part of numerous Ayurvedic remedies and with an alternative name as Green Ginger, wormwood herb and its therapeutic oil has been used for more than thousands of years in Ayurveda, the ancient wisdom of healing humanity.

Historical uses of Wormwood and its essential oil:

The spectacular fact about Wormwood is that it was used by Hippocrates, the ancient Greek Physician and the father of western medicine. Many ancient monks and nuns used this bitter herb in the form of an elixir for its detoxifying properties.

The prehistoric use of Wormwood has been mentioned in Bible and the first century writings of Greece and Rome, where the herb was said to be placed in the sandals of Roman warriors to pacify their sore feet.

Saint Hildegard of Bingen, known as the Doctor of the Church and Sibyl of the Rhine was highly celebrated for her brilliance in medicinal and botanical writings, philosophy, music and much more. She used Wormwood herb to treat melancholy, digestive disorders, elimination process, improper functioning of lungs and heart.

She advised her patients to consume the fresh juice of wormwood leaves mixed with honey and warm wine on empty stomach on every third day from the month of May to October. Hildegard trusted that the use of wormwood herb helped in promoting the functioning of the entire system by effectively eliminating the toxins from the arteries through kidneys and preventing the accumulation of black bile, which is the melancholic humor.

Wormwood was used for spiritual and psychic work in the primordial times and the essential oil of Wormwood is trusted to treat numerous health disorders ranging from fever to flatulence.

The predominant health benefits of Wormwood essential oil are: 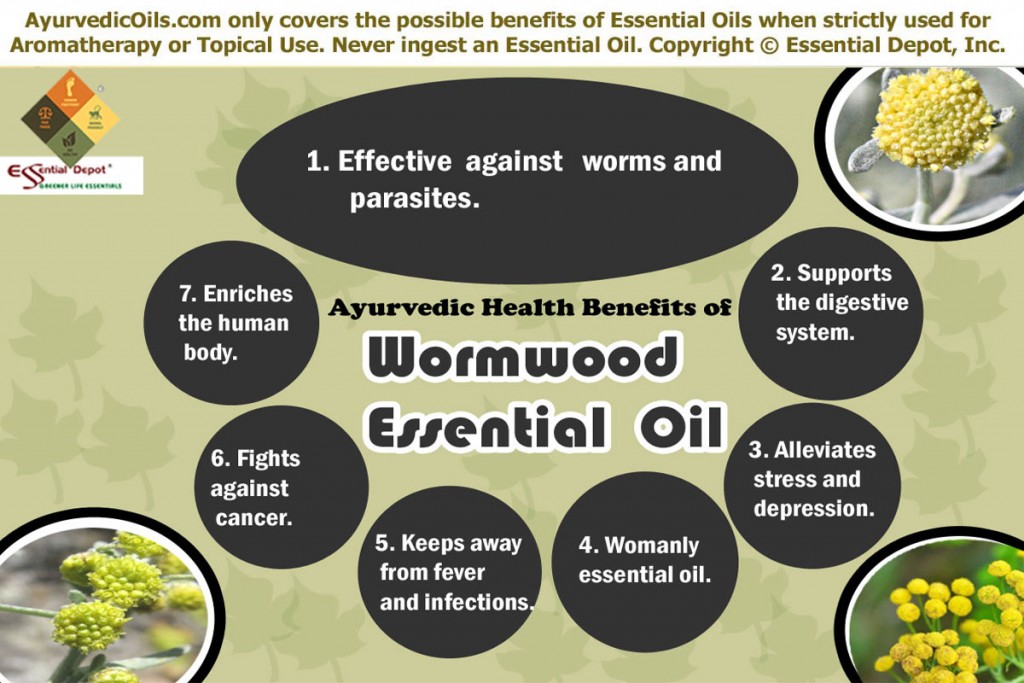 1. Effective against worms and parasites:

Worms and parasites in the body are often the main reason for curtailing the normal growth, especially in children. This is mainly because these foreign bodies absorb the nutrients from the food and restrict the system from gaining the required nourishment.

With its Vermifuge property and high toxic effects, wormwood herb and its essential oil is considered as the most powerful natural remedy in killing worms and parasites. In certain cases this oil is given as an enema in treating worms in the rectum and intestines.

Wormwood essential oil nurtures the digestive system and effectively helps in removing the toxic substances known as ama from the body. According to Ayurveda, improper digestion is the root cause for all kinds of illnesses as the undigested food particles turn as toxins and curb the normal functioning of the body. Wormwood essential oil strengthens the entire digestive system with its carminative, stomachic, cholagogue, anthelmintic, tonic and stimulant properties.

The presence of artabsin and absinthin in Wormwood oil are responsible for the bitter taste, which acts as a stimulant in enlivening the taste buds and improving the secretion of saliva and perking up the natural appetite of an individual.

It promotes proper discharge of bile secretion from the liver to the stomach and effectively counterbalances the excess acid substance while assisting the complete process of metabolism. All these healing properties of Wormwood essential oil make it a promising remedy in the treatment of acidosis, ulcer, liver and gall bladder problems and numerous other digestive disorders.

A well-known research on ‘The Debate About Wormwood and Thujone Psycho-activity‘ proved that the presence of α-thujone (alpha thujone) and β-thujone (beta thujone) in Artemisia absinthium are responsible for Psycho-activity and the higher-potency α-thujone is considered as the primary psychoactive agent. Adding 2 drops of Wormwood essential oil to a tissue and placing it near your pillow can give you great relief for a peaceful night’s sleep.

The emmenagogue property in this oil enhances the blood circulation in the uterus and pelvic region while strengthening the pelvic floor muscles. This oil is also used as a pain reliever during labor.

Ayurveda recommends Abhyanga or the art of massaging in an Ayurvedic manner for treating problems related to menstruation and menopause. Gently massaging 2 to 3 drops of wormwood essential oil along with sesame oil or coconut oil can grant significant relief and support the health of the female reproductive system.

5. Keeps away fever and infections:

Wormwood essential oil is effectual in treating fever due to bacterial and viral infections and this healing property is attributed to the presence of the toxic components like α-thujone and β-thujone, which act as a shield to the body and protects it from microbes and other harmful infections.

A research by the Cancer institute on the effectiveness of Complementary and alternative medicine in 2004 witnessed that Wormwood is powerful in treating fever and was used in Malaria treatment. The ancient Africans and Asians used Wormwood to combat malaria and to treat few other mosquito-borne diseases.

The chemical properties of Wormwood have been proved as a potent cancer treatment by the Bioengineering researchers of the University of Washington. It has been witnessed that this derivative killed almost all the human breast cancer cells exposed to it within a time span of 16 hours. They also said that this wormwood derivative is “highly toxic to the cancer cells, but has a marginal impact on normal breast cells”.

The great news is that Wormwood essential oil acts as a tonic to the entire system by stimulating the digestive system, improving the functioning of the circulatory system, strengthening the immune system, acting as a cardiac tonic, fortifying the nervous system and supporting the working of the excretory system, enabling the body to expel the unwanted toxic substances and stay vigilant at all times.

The natural and strong aroma of Wormwood essential oil makes it an important component of certain deodorants. This oil can also be used as a powerful insect repellant with its poisonous effects. Adding few drops of Wormwood oil to your vaporizers, sprays and fumigants can help you keep the harmful insects at bay.

Wormwood essential oil is a neurotoxin and has narcotic effects so never ingest this essential oil as it may harm the system. Essential oils are highly concentrated and do not apply this oil directly to your skin and always remember to blend it with carrier oils. Consult your medical practitioner before using the right essential oil for your health and your constitution.

Wormwood oil is considered as a narcotic oil when used in higher doses. The adverse effects of Wormwood oil is attributed to the presence of chemical constituent thujone, which contributes to about 50 percent of the oil. Thujone containing oils are restricted prevalently, mainly due to the concern of its psychotropic, nephrotoxic and neurotoxic effects. It may cause skin irritation, redness, eruptions in sensitive skin and dermatitis.

Studies witness the excitation of the autonomic nervous system due to convulsions and binding of the GABA receptors caused due to α and β-thujone. It is also a known fact that high amount of thujone and its metabolites can induce convulsions, unconsciousness, seizures, gastrointestinal cramps, insomnia, tremors, dizziness, hallucinations, vomiting, headaches, retention of urine, renal lesions, congestive heart failure and rhabdomyolysis (collapse of muscular fibers).

Wormwood should never be used internally as there are numerous studies witnessing the severe toxic effects of ingesting this oil and few cases include absinthism and the acute renal failure due to rhabdomyolysis in a person who drank about 10 ml of Wormwood oil; In an another case, the intake of 60 ml of Wormwood oil ended up in seizure, altered mental faculty, attention disability, rhabdomyolysis and hyperthermia.

Blend Wormwood oil in mild carrier oils like Coconut oil or Avocado oil before topical use as pure and organic essential oils are highly concentrated substances and can harm the skin surface if used in a concentrated form. The safe level of dermal use for this oil is 0.4% by IFRA (International Fragrance Association).

Dr. William Smith in a Medico-Chirurgical transaction study talks about the case of poisoning by Wormwood oil. It is stated that this oil has narcotic influence that may have negative impact on the nervous system, causing headache, convulsions, giddiness, vomiting, tremors and paralysis.

The PanAfrican Medical Journal study talks about the burning effects of Wormwood herb, where a 50 year old woman reported a severe pain in the facial skin with a dry and delicate erythema in the cheeks and forehead classified as an initial degree burn.

It was concluded that the presence of toxic agents, like thujone and malic acid were responsible for the adverse effects like redness, skin sensitivity and chemical burns. It was termed as a phytodermatose, which are lesions on the skin due to the frequent contact with certain herbs. Research reports also state that thujone is porphyrogenic in nature and can be hazardous for patients with defective hepatic heme synthesis.

With thujone being the toxic component, using Wormwood oil can act as a threat to pregnancy as it may affect the health of the uterus with its emmenagogue and abortifacient effects and is good to continue avoiding this oil during lactation as well.

It is advisable to restrict the use of this oil on children as they have a sensitive skin. Wormwood oil can also cause allergic reactions on the skin for those who are susceptible to plants of the Compositae/Asteraceae family like the Marigold, Ragweed, Chrysanthemum etc.,

Life is not living, but living in health.